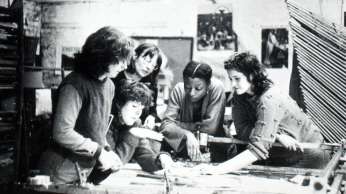 The theme for the 2020 Festival is inspired by the 50th anniversary of the first Women’s Liberation Conference which was held at Ruskin College, Oxford over 3 days at the end of February 1970. The conference was led by women, as a space to question women’s role in society, create new dialogues and to campaign for women’s equality and equality of opportunity.

The women developed four demands: equal pay, improved education, twenty-four hour nurseries, free contraception and abortion on demand, as well as a commitment to campaign on other issues as they arose.

This ‘thread of liberation’ was a continuation of earlier struggles; the Civil Rights Movement, the abolition of slavery and the campaigns for women’s suffrage and for women’s welfare rights. The struggle for women’s liberation has continued, but also reacted to growing concerns about women’s role in society: the commodification of women in the media, sexual politics, clothing rights and body image. This has all been influenced by the way in which ideas are communicated, the role of language and how political and personal relationships continue to govern society in both positive and negative ways.

The Festival’s aims will be to debate and examine some of these ‘threads of liberation’ and how these influence women’s lives locally, nationally and internationally through music, dance, film, discussion and debate.

If you would like to organise an event, please find the application form here: